Todd Rundgren has stepped in as support for the Hall & Oates tour in the US once he finishes his European Dates with Joe jackson and Ethel. Todd replaces Tears for Fears
Posted by Scott at 4:28 PM No comments:

Maybe the boys had been saving their best for the UK, or maybe that practice has helped but both the Gigs at Leicester DeMontford Hall (Fri 3rd), and London Hammersmith Apollo (Sun 5th) were pretty damn good. Sure, there were mistakes, but if I wanted to listen to perfect renditions of the songs I'd sit at home and play a CD.

As in the earlier leg of the tour the role call was Ethel, Joe and then Todd.

Ethel's brand of string quartet is perhaps not everyone's cup of tea, but these guys can play: - Todd Reynolds and Mary Rowell, violins; Ralph Farris, viola; and the rather sexy Dorothy Lawson, cello are a treat for real music lovers anywhere, playing a mixture of styles with equal verve and skill. I would happily pay just to see these guys in the future.

Joe Jackson, who I must confess I lost interest in after his second album, delivered a well balanced set both nights between old 'classics' (stepping Out', 'Is she really going out with him', 'It's different for girls' etc ) and more recent material including the lovely 'Love at first light' from his recent Vol 4 CD, and a new tune 'Citizen Sane'.

Both Joe and Todd seemed in a more chatty mood at the Leicester gig, which saw Todd as chatty as I have even seen him, very upbeat, which is why in his own words he decided to be risky and throw in things he hadn't done for a while - most notably, 'Can we still be friends' (ok, so he did slightly fuck up the piano at the start of it, but it was still GOOD)

The quality of piano's provided on the tour got mentions both nights. In Leicester Joe lamented that he and Todd were happy that they had a decent piano for the evening after a dreadful one in York; and in London it was Todd's turn to say the piano was crap - 'I didn't think Yamaha made bad instruments' he whispered saying that he and Joe didn't think much of the evenings piano.

The gigs also saw 3 songs from the Liars album get an airing - 'Afterlife' on both nights (sounded much cleaner at the London Gig) and 'Soul Brother' (Leicester), and 'Stood up' (London) played with Joe and Ethel. If the version of 'Soul Brother' on the Liars tour was a bit of a disappointment live (and it was for me) done with guitar piano and strings it was just about perfection.

'Pretending to Care' both nights played with Ethel was sublime. Todd really had written few songs that are as beautiful as this one, and live this was almost worth the ticket price on its own. Both nights also saw the delight of songs you never imagined you'd ever hear Todd play live - 'Lord Chancellor's Nightmare Song' and 'Viking Song' - both delivered perfectly.

Ok, so it wasn't all plain sailing Todd fluffed he piano part in 'Hawking' (London) and hit a few other bum notes on guitar and with voice both nights, but this was still bloody good stuff.

Both nights were rounded off with brilliant versions of 'My guitar gently weeps' with Joe and Todd sharing the vocals and Ethel doing the guitar 'solo' bits.

I doubt we'll have the pleasure of the Utopia reunion tour if it goes ahead, but Todd recently promised to return to these shores about once every two years, so hopefully they'll be more chances to see him soon.

Can we still be friends
Viking Song
Hello It's Me

My Guitar Gently Weeps (With Ethel/Joe)

Viking Song
Hawking
Hello It's Me

My Guitar Gently Weeps (With Ethel/Joe)

The Scotsman has an interview with Joe Jackson today ahead of Todd and Joe's Edinburgh date. Explaining the get together Jackson says: "We're both very eclectic, we've both been around for a few years now and done lots of different things. And we've both sometimes been ahead of our time, or at least that's how we'd like to see it!"

The Guardian's Dave Simpson gave the York gig 3/5 but said of Todd "Britons never really 'got' his brash Americana, and those that did must be bewildered to hear long-unaired classics like I Saw the Light tossed off on guitar."

I not sure why anyone would be bewildered. Maybe it was just Dave. Or perhaps it was because Todd stopped playing midway through, to hail a bitter-sweet guitar chord.

He does however rightly praise just how good Todd, Joe and Ethel sounded combined "By the time they've taken the Beatles' While My Guitar Gently Weeps to places it has never visited, this unlikely collaboration starts to feel like it could be the making of all concerned."
Posted by Scott at 1:01 PM No comments:
Todd & and man in front's head - London 5th June 2005 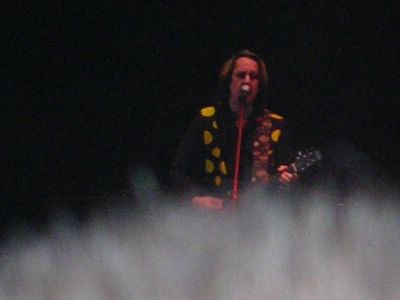 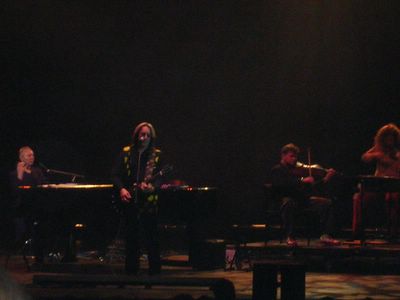 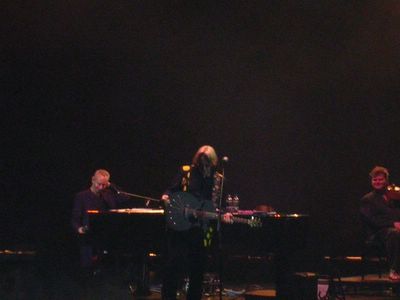 Posted by Scott at 12:09 AM No comments:
Newer Posts Older Posts Home
Subscribe to: Posts (Atom)