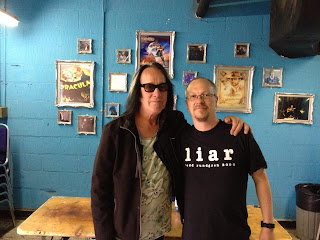 The chance to see Todd live is always one I try not to miss, if for no other reason than, these days no one tour is like another. So since Todd started coming back to the UK more regularly we have had Todd with Ethyl, Todd doing Lounge greatest hits, Todd doing AWATS, Todd doing Arena (rock god Todd) and Todd doing Liars. No one tour has been like another, and I think it is fair to say the Official State tour keeps that trend going.

The closest you could get to this version of Todd would have been the No World Order tour (and indeed a couple of tracks from that make it into the set).

This gig was also going to be different from my usual experiences of Todd gigs because this time around I was going to meet the man himself. I had entered a competition run by 02 on their Facebook page, and found out on Thursday night that I was a winner and would be getting a few minutes with Todd.

So at 7pm me and another guy met a member of Todd's UK promotions team who took us into the venue and to a small room at the top and a few moments later, Todd appeared. For the next 15 or so minutes we just chatted about Facebook, social media, digital downloads/streaming and a few other things. Todd was relaxed and funny. He was kind enough to sign a couple of CD covers for me too (I even got him to sign TPOH - Love Junk (with both of us agreeing it should have been a bigger album and they a bigger band) I also spoke to him about Jill Sobule, whom he also still has fond memories of.

I am always a bit wary of meeting any kind of musical hero, but my meeting with Todd was a delight. But, the main question of course is was the actual gig and DJ Odd a winner or not? Actually, yes.

Dance todd was an upbeat and fun musical experience. He sang, he danced, the lights flashed like you were at a nightclub rave. It was great. The Tracks from the new album, blended with a few from reProduction and a few choice others came across well. His voice too was spot on with Secret Society and Truth being a vocal highlights, but surprisingly two of the best moments overall were the two tracks from No World Order (the title track and World Wide Epiphany) which were spectacularly good.

I'm already looking forward to what musical approach will bring him back to our shores next, whatever it is, I'm sure it'll fun.

Encore: Can We Still Be Friends / I Saw the Light / Hello It's Me (Dance versions)

Some people's recording some of the tracks: