Todd at the Royston gig as reported by Fox News

As for Rundgren, we did talk about his exclusion so far from the Rock and Roll Hall of Fame. "I wouldn't go even if they inducted me," he insisted. "I loved what the Sex Pistols did this year."
Rundgren has every right to be bitter. Apart from hits like "Hello It's Me" and "I Saw the Light," he has also been a seminal producer for Grand Funk Railroad, Badfinger, XTC and other groups.
After a while he said, "Let me know if I get in. I could come and not be happy about it."
Posted by Scott at 10:35 PM No comments: 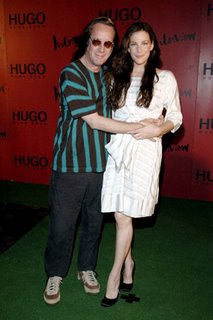 Todd showed up - along with Bebe Buell, Stephen Tyler, and Liv Tyler to the performance by Arckid, Liv's husband Royston's (ex Spacehog) latest band. David Bowie was also at the gig in New york for the Hugo Boss and Interview Private Rooftop Concert.
Posted by Scott at 3:06 PM 1 comment:

So, went to see the Weakerthans on Wednesday evening at the mean fiddler. This was the same place I saw them for the first time back in 2004. There were a few more people in the audience this time around I must say.

They had two support acts, but only arrived in time to see Tomte, a German band (who perform in German - aside from links to the songs in English). It seems they and the Weakerthans are sharing headline staus on this European tour, swapping to suit popularity in a given country. As such both played for around an hour. Tomte weren't too bad actually, can see why they have supported Cold Play in the past.

But to the main event. John K Samson walked on his own and got things rolling with One Great City (aka I hate Winnepeg) It was good to see John K is still parting with money when he fucks up songs - this time it was £7.20 (i think) for forgetting a couple of words during a rip-rawing rendition of Aside.

Surprisngly the set was quite light on the quieter more introspective tunes and stuck with the more rockier tunes. Diagnosis, Wednesday's Wellingtons, The Reasons, A Plea from a Cat Named Virtue.

We got a few new tracks from an album that is half finished and will hopefully see the light of day in 2007 .

They do, in my opinion, remain a very good live band. Roll on next time. A bit sooner would be good boys.
Posted by Scott at 11:26 PM No comments:
Newer Posts Older Posts Home
Subscribe to: Posts (Atom)