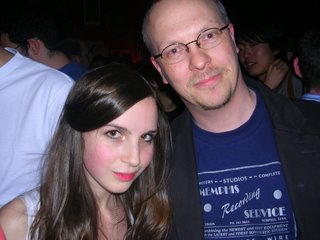 Went to see The Like tonight at the 100 Club on oxford street. Good gog. Sean Na Na suppoting (aka Har mar superstar) His band were pretty good, and he was standing selling The like T-shirts and stuff at the end of the gig - and was open to a chat and agreed that not being tied down to one kind of music was important. He is also a star.

Also big thank you ( BIG THANK YOU) to charlotte who kindly agreed to this photo. I made a bit of a pratt of myself by not being able to remember 'The Key of Cool' when i said i was a fan of her father's work, and sounded like i just knew he produced crowded house and richard thompson.
Posted by Scott at 12:14 AM No comments: 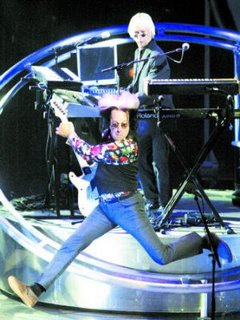 The Fort Worth Star Telegram has a review of the Blondie/New Cars gig and say of the Cars: "The New Cars is a reincarnation of the Cars (do we now call the old version the Used Cars?) with Ric Ocasek's spot in the band taken by studio wizard Todd Rundgren. Since this was only the second performance by this new lineup, it was not surprising that the group hasn't yet jelled as a band.

On the whole, it was pretty easy to kick a couple of the tires on this model and just walk away".
Posted by Scott at 9:28 PM No comments:
Newer Posts Older Posts Home
Subscribe to: Posts (Atom)